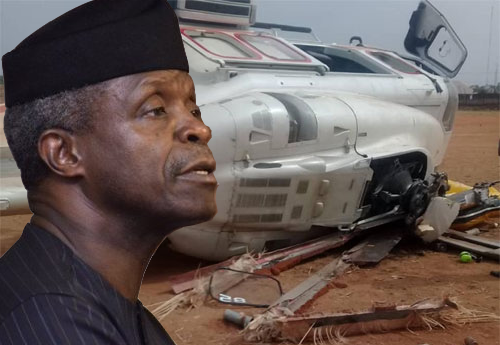 The helicopter carrying the Vice President had crash landed after a landing incident, but without anyone hurt.
In a statement by his spokesperson, Laolu Akande in Abuja yesterday, Osinbajo, expressed thanks to Nigerians for their concern in the chopper incident which happened in Kabba, Kogi State.

Akande said that Prof. Osinbajo after the mishap continued his engagements in the State, engaging the people on the Next Level plan of the Buhari administration.

He quoted the Vice President as saying, “We are safe and sound. Thank you to everyone who has expressed concern, and thank you to the crew who managed and the situation well.

“We believe that God will continue to keep us and Nigeria safe even as we go higher. We continue Next level engagements in Kabba, Kogi State.”

Speaking at the Obaro of Kabba’s Palace, his first stop in his visit to the State, Osinbajo expressed gratitude to God for the deliverance from the Chopper crash.

He added, “We are extremely grateful to the Lord for preserving our lives from the incident that just happened. Everyone is safe and no one is maimed. God has kept us safe and alive, delivered us from death so we can do more for our people and country.”

It will be recalled that the Saturday incident was the second time Mr Osinbajo’s helicopter would crash-land.

In June 2017, he survived a similar accident when the chopper he was traveling in crash-landed shortly after take off in Gwagawalada, Abuja.

He was in the area council to attend the graduation of 40 senior officers of the Nigeria Customs Service.

Efforts made to get the actual cause of the crash was not successful as Akande did not pick the calls on his GSM line. 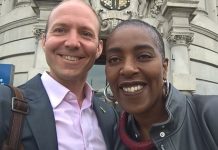